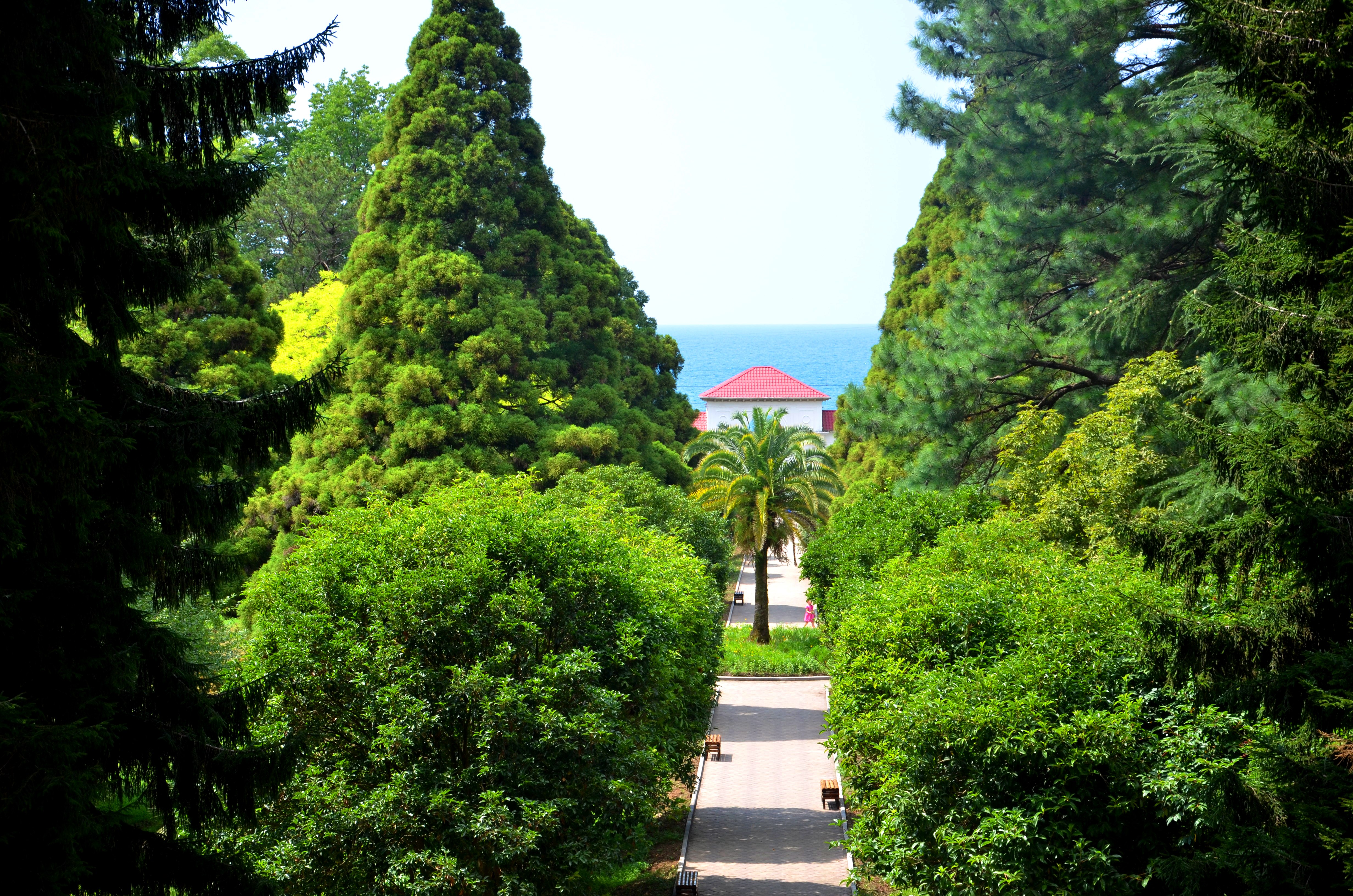 The above-mentioned territory, since foundation of the Garden was initially designed s most populous site by A. Krasnov. It belonged to phyto-geographic department of Northern America and before being reformed to as Seaside Park, it represented so called “American Boulevard”, being separated from European Boulevard. For that period, this site was covered with grassy-flowery plants and roses extraordinary for our region. It acted as the main entrance to Botanical garden from the sea, railway and Chakvi.

During the World War II so called American Boulevard was destroyed, making it necessary to refurbish it (1950). Construction of a new park was undertaken by Agronomist-Decorator Giorgi Gabrichidze, who decided to design the park in French-Regular style, which was a profitable decision as a new park designed in French-Regular style at the background of Upper and Lower Parks grown in the natural style with its straightforward borders was deemed as an art work. IN the surroundings of Buxus sempervirens, pyramid like compactly growing Cryptomeria japonica f. compacta, Deutzia scabra, adoring Osmanthus fragrans; O. heterofilum and Michelia fuscata, Acer palmatum v.dissectum “Palmatifidum”, A. p. v. dissectum “Rubellum”, Hydrangea paniculata , Hydrangea macrophylla, Laurus nobilis), Jlex aquifolia L. f. albo-marginata and other ligneous plants attractive flower gardens were distinguished in the flowerbeds of Nortehr American origin palms, i.e. Sabal palmetto.

Central part of the park was represented with the flowerbed arranged in the junction of two main walking roads, decorated with charming Phoenix canariensis. The road from the Centre of the Park to the Sea lead us to a neat building – Platform “Botanical Garden”, with a beach arranged nearby (from where under good weather conditions the State Border with Turkey is noticeable from the left, whereas from the right with Russia). In the opposite site of the platform, massive steps are leading to the central road of the Northern American Florist Department. Seaside park is decorated with the lanes of Osmanthus fragrans; O. heterofilum, Camelia sasanqua, Acer palmatum v.dissectum “Palmatifidum”, A. p. v. dissectum “Rubellum”, Lagerstroemia indica , Trachycarpus fortunei. Attractive samples of Acer negundo argenteo-marginata და Acer negundo “Flamingo”, Pinus taeda of northern American Origin, Magnolia grandiflora, Magnolia x soulangeana, Magnolia tripetala, Magnolia virginiana, Viburnum rhytidophyllum, Viburnum tinus, Acca selloviana, Michelia fuscata and many other decorative plans are grown in the Park.

This park is even today meets its primary idea – being the most crowded ark on the territory of the Botanical Garden, as the tourist route finishes there for the visitors entering from the Green Cape and Chakvi Pass. Main entrance for the visitors entering from Chakvi starts from here; there is a main pass to the beach; picnic and camping recreational zone; cafes and bars; nursery and greenhouse economy; exit into Chakvi direction. From 2014 Plant Realization Salon Shop and so called “Ritual Podium” was added to the recreational zone of the park – enabling marrying couples to arrange photo session and Official Wedding Signing Ceremony; the exhibitions of cones, bamboos and other events are also arranged there.